Seiichi Saito, a Japanese in Chorey-les-Beaune

In recent years, many young Japanese winegrowers and winegrowers have settled in France with the success that we know of them. Without wishing to generalize, there are all the same great similarities in the precision of the wines of Kenjiro Kagami (Jura), Mito Inoue (Auvergne), Hirotake Ooka (Saint Joseph) or even the young Rié and Hirofumi Shoji from Pedres Blanques. recently installed in Collioure.

So, inevitably, when we heard that one of their compatriots was settling near us, in Chorey-les-Beaune, we didn't hesitate for a second and we paid him a visit. 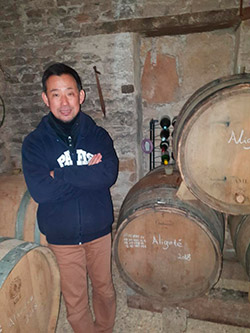 Seiichi Saito was born in China but raised in Japan. After studying soils for a few years and obtaining his diploma in pedology, he began to take an interest in vines and did his first internship in a local estate in 2005. He is 22 years old and the subject fascinates him. He then decided to leave Japan to deepen his knowledge of wine and joined the Simon-Bize estate where he gained experience while following training at the CFPPA in Beaune. He, who was originally supposed to return to Japan, finally decides to stay in France and works in various activities related to wine. He notably created the restaurant La Lune in Beaune. But the idea of ​​becoming a winegrower is still in his head.

In 2016, he finally decided to take the plunge and created the Petit-Roy estate. With rudimentary equipment, he works his small 1.3 hectare vineyard (plus a little purchase of grapes, especially for the Côte de Nuits cuvée), all organically, and carries out his first harvest in 2016. When we we met at the end of 2018, it was a winemaker sure of his method that we met. And when we tasted the juices, we were won over.

The majority of its reds are worked in whole bunches, with the exception of Bourgogne L'Orme, all with a lot of precision but also a good dose of instinct. For ageing, he uses no new barrels to avoid any marking by the wood. It still simply carries out a slight sulphiting during aging to avoid any aromatic deviation. At the tasting, the result is very exciting. For its second vintage (2017), the wines present a beautiful density, a remarkable balance and a very nice touch on the palate. In the end, it's a real nice surprise that we are proud to present to you today.